Fueled by Faith — Ep. 12 A Conversation with Alicia Johnson (@mchealthy225)

by Taylor M. Rysdon
No Comments 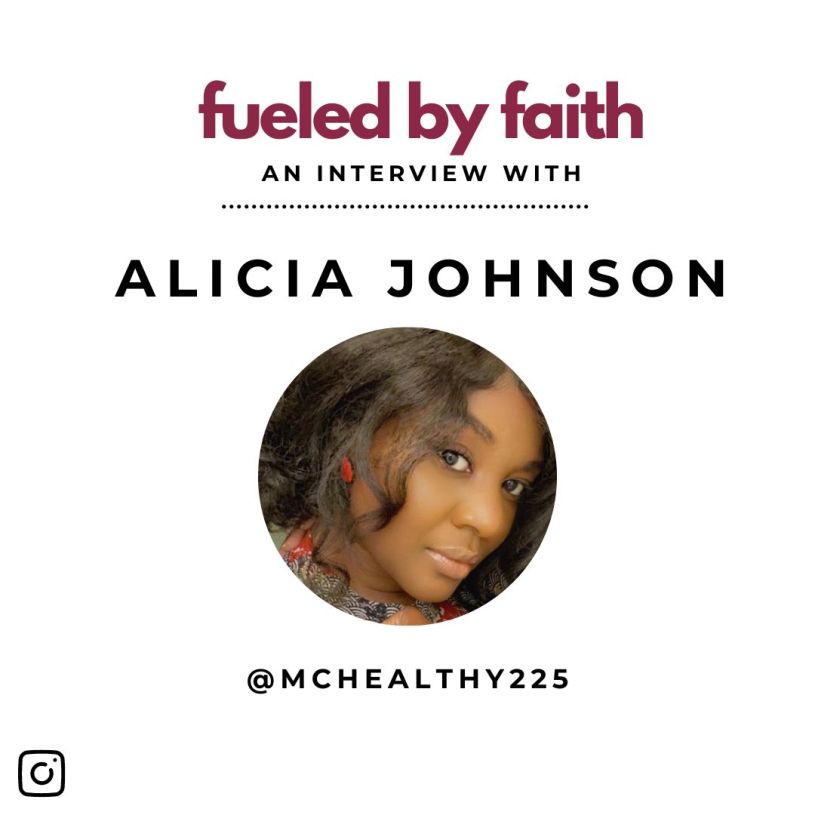 “Whatever you buy, just read your labels. Really look at the things listed. If you can’t pronounce it, stay away from it. If they have to add all of that to it, it’s not in it’s purest form. Also, to new vegans, don’t ever beat yourself up if you mess up…your body will talk to you and tell you what you need. Pace yourself and don’t compare yourself to other people. Do it for you!”

I kicked off 2022 spotlighting vegan influencer, Alicia Johnson (@mchealthy225), in my Fueled by Faith series. She graced us all with her southern charm and provided key nuggets on how she embraced the vegan lifestyle, publishing her recipe book. She is a charismatic and creative force to be reckoned with as an expert in all things vegan. As a mom, recipe creator, published author, and best friend to all, I’m grateful and honored to know her.

I know you decided to go vegan in 2017, can you share a bit about what motivated that decision?

“Well, I started off by watching the What the Health documentary. My son was born with bad sinuses and eczema that I was growing irritated with. He was a baby and it was hard to see him suffer through that. At first, I took the doctor’s advice and used the creams they prescribed, but after a while, I realized it must be something internal. So after watching What the Health, I took him away from certain foods and noticed a difference. Once I did it for him, I realized that I might as well do it for myself as well and it became a habit for us both.

This is a hot topic in the vegan community – would you say you’re vegan now for the environment, your health, or for the animals?

“Initially it was for my son’s health situation. Now, it’s for all three reasons. We all need to consider a vegan lifestyle to be healthy and live a longer life. It also hurts my heart to also think about how animals are treated. And when it comes to the environment, we need our trees. It’s all important.”

Are there any other documentaries you’d recommend – for individuals interested in going vegan?

“I strongly recommend viewers to watch Cowspiracy and Forks over Knives.”

What made you decide to publish your recipes so quickly after going vegan?

“Here’s the thing, as I was cooking the foods to mimic a southern meal (which I’m used to), I was feeding it to my family and they weren’t complaining. I realized the perception of eating plants was that it is ‘boring’. Even though I’m not that popular (my thoughts at the time), I figured I might be able to inspire a few people in Baton Rogue to consider a vegan lifestyle and get away from their perceptions of it being a boring lifestyle.

Deep down, I really wasn’t sure that there would be interest for a cookbook on vegan southern cooking, but it really did go far. My book, Mommy’s Cooking Healthy Southern Style: Introducing 28 Simple Vegetarian and Vegan Meals for Your Family has been purchased not just in Louisiana but all over the United States. I am proud and still feel really shocked.”

Support & connect with my girl ALICIA

Fueled by Faith — Ep. 13, A Conversation with Brianna

Fueled by Faith — Ep. 6 A Conversation with Amanda Marie Vieira

Fueled by Faith — Ep. 10 A Conversation with Jennifer from the Aquafaba Test Kitchen